If you ever want to see a producer roll their eyes so hard they throw their back out, use the phrase “we’ll fix it in post!” in front of them on a shoot. What the person saying that means is that whatever has gone wrong will be dumped unceremoniously onto the editor’s plate to try to correct. It’s said so often it’s become a meme in the industry. 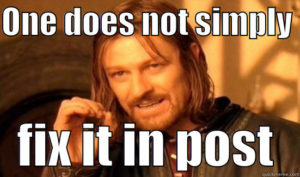 Good producers hate this phrase because it means the planning and preparation broke down, and now the fix will be costly and time-consuming. How can you avoid this supreme hassle? Take the time to really organize your pre-production process. Time spent up front is much cheaper than paying for post-production, especially in e-learning video production. Here are 5 things to think about while you “Fix it in Prep”:

1. Get approval on the vision of the project early on.

Take the time to determine who has the real decision-making power, and make sure they’re involved in approvals for all creative materials. This sets the tone for all choices made down the line. If you don’t, you run the risk of having to re-do work.

This is a fancy way of saying that you need to create a detailed list of everything that needs to be done before shooting, and share it out with everyone on the team. Make sure they’re on-board with the timelines they need to hit. And if you think you gave yourself enough time, add another 2 weeks into the schedule to account for the inevitable delays. MOOCs often have a lot of people involved, and one missed deadline can cause an avalanche of delays.

Unless you are creating a cartoon, you can’t change what comes out of a person’s mouth on video without re-shooting. Reshoots cost money and delay your delivery. A locked script or talking points ensures all stakeholders are aligned with content. And it can prevent instructors from rambling and improvising, which also takes more time in the editing process.

Take the time to review where you’ll be shooting. Check for noise issues, problematic light or shadows, and see if it looks the way you want it to. Cleaning up bad audio because you can hear the elevator dinging every 30 seconds can get expensive in the mixing stage.

Let them know what to expect on the day. What time should they arrive? What should they wear? Have they read, reviewed, and practiced the scripts? Poor preparation from talent can turn a 2 hour shoot into a 12 hour shoot.

No prep is perfect. Stuff happens. You’ll forget things and need to think and make fixes on the fly. But the more organization and planning you bring to the table before the cameras start rolling, the more relaxed your shoot will be, and the more prepared you’ll feel.

And hopefully you won’t be attacked by your editor. 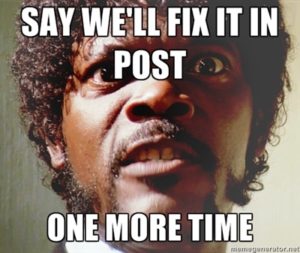 Stay up to date with the latest news and tips